"carefully and with great precision demolishes the nonsense that pervades the popular and technical literature pretending to be scientific fact, exposing it as truthiness which is nowhere close to truth. ... When I first heard about this book it was clear, even before reading it, that this is the book we've been waiting for. Now, having read it, I can assure you that it is even better than I thought it could be. ... Buy it. Get your friends, your colleagues, your family members to buy it, or buy it for them. Get it to your local school board. Make it required reading, not only in gender studies, but in freshman sociology, biology, education and business courses. Get it on the New York Times bestseller list. ... Our culture is saturated with sloppy self-reinforcing non-thinking about gender. It will take a monumental effort to get it off those tracks. Delusions of Gender is an excellent place to start."

"I would certainly recommend both [Delusions of Gender and Brainstorm] ... they are well-informed, well- argued and (for science books, perhaps unusually) well-written interventions in what I would consider ... one of the most important debates in current sexual politics."

"highly readable and enjoyable ... should be required reading for every neurobiology student, if not every human being."

"Fine has written a powerful, clear and scholarly rebuke of the growing genre of 'popular' pseudoscientific accounts of sex difference. ... Her scathing and very well informed attack is conducted with wit and humour making what ought to be a heavy read into a veritable page-turner. She has met the genre on its own terms and produced a book that can be read by the very people who have enjoyed Men are From Mars Women Are From Venus. ... a most welcome and important book".

"With Delusions of Gender we welcome a brilliant feminist critic of the neurosciences. ... Fine writes with bravura. She takes no hostages. She rejoices in demystifying the compellingly seductive false colour images provided by the MRI scanners ... a book that sparkles with wit, which is easy to read but underpinned by substantial scholarship and a formidable 100-page bibliography ... every page of Fine's brilliant, spiky book reminds us that science is part of culture and that the struggle against sexism in the neurosciences and the struggle against sexism in society are intimately linked. Read her, enjoy and learn."

"a fabulous combination of wit, passion, and scholarship ... This marvelous and important book will change the way readers view the gendered world."

"In this fascinating study of "the real science behind sex differences", the psychologist and neuroscientist Dr Cordelia Fine argues convincingly that everything we once thought is wrong. ... The hard data is illuminating, and engaging, but Fine manages a light touch throughout. This is a truly startling book."

"Fine is fun, droll yet deeply serious. Setting a cracking pace, Delusions tackles the power of implicit association (those unconscious associations we make about men and women) and of negative stereotyping, plus the empathising/systematising theory proposed by psychologist Simon Baron-Cohen, and the messy world of brain scans and genetic research. Her conclusion: we are in thrall to 'neurosexism'."

"We are all in [Fine's] debt. She has the expertise to check the research references cited by academic as well as popular books on the subject, and she has the clarity and wit to impart her findings to the lay reader.

"As Fine argues in this forceful, funny new book, the notion that gender accounts for differences in minds and behavior through some biological, brain-based process is an idea as popular as it is unproven. ... Fine is at her most effective when skewering those who make hay of alleged brain-based differences between men and women. ... Whether or not you believed in hard-wired gender differences before reading her book, it would be difficult to complete it without feeling at least a healthy skepticism about the role of biology in the way our lives play out."

"Trying to distinguish the female from the male brain is a trap that many writers fall into. Two books [Delusions of Gender and Brain Storm] provide a welcome corrective by reviewing scientific evidence showing that the sexes are more alike than different, and that small sex differences are not fixed but change with context and across generations.... Eventually, unsupported preconceptions about what counts as masculine and feminine will be discarded. Until then, people such as Fine and Jordan-Young are just who we need."

"[an] irreverent and important book"

"In a methodical and devastatingly effective manner, Fine eviscerates the recent trend in attributing society's gender-based differences to biology. The sheer girth of her analysis is staggering ... This is social science at its hard-working best as Fine uses solid references to refute the notion that biology trumps pervasive stereotyping, and offers a sterling rebuttal to agenda research and the lure of pseudo-science. "

"Normally the popular science section is a haven for the nerdish boys, banging on about evolution or the latest barmy notion from the theoretical physics glee club. Three cheers then for Cordelia Fine, sticking a ruthlessly scientific stiletto into sexist notions of Mars and Venus style alleged gender differences. Vive la meme?"

"Like Robert Wright [author of 'The Moral Animal'] ... Fine's greatest strength is her accessible voice and clear structure. Weaving together anecdotes, dense research and quotes from numerous experts, she offers a well-balanced testament to the many ways in which cultural rules inform behaviors often mistaken as organic to our brains, as opposed to learned. ... well-rendered and lucid ..."

"an admirably fluent review of a gazillion brain-science studies."

The September ELLE 25 portfolio
(A list of the 25 books/plays/movies/music to look out for this fall.)

"Fine invites her readers into a passionate, insightful and often funny discussion about how gender identity is all in the mind, not the brain; in the software, not the hardware, if you will."

"Cordelia Fine's thorough (and funny!) Delusions of Gender punches a giant hole in the idea that women's brains are somehow "hardwired" for nurturing and domesticity."

"[B]oth sexes should rejoice at Cordelia Fine's new book, Delusions of Gender, a vitriolic attack on the sexism masquerading as psychology that is enjoying a renaissance. ... impeccably researched and bitingly funny"

"[B]old ... Timely and provocative ... [Fine's] well-stocked armoury ... includes extensive research, sharp wit and a probing intelligence, and which refuses to be satisfied with the delusional myth-making that often passes for popular science."

"So you thought sexism was a thing of the past? Not so much, says Cordelia Fine. A growing number of Americans believe there's an 'immutable' biological difference between the male and female brain. But brain differences are no explanations for why so few women are engineers and so few men go into nursing. Fine says old myths dressed up with new science are propagating dangerous new conventional wisdom, and when it comes down to it, she argues, all that science just doesn't add up. ... Packed with rich scientific detail - evidenced by 82 pages of footnotes - Fine's argument is solid"

"Cordelia Fine's Delusions of Gender is an engaging, entertaining and powerfully argued reply to the many authors - who range from the scientifically respectable to the less so - who've recently claimed to have shown biological sex differences in brain, mind and behaviour."

"an important and thoroughly engaging book."

"There is no doubting Cordelia Fine has a case to make that neuroscience is used by some in a way that it has often been used in the past: to reinforce, with all the authority of science, old stereotypes and roles. But although she is arguing a case about the way society's ideas of what men and women do best shape behaviour, this is an excellent book that puts the old nature-or-nurture debate in the context of the new science on the way our brains work."

"Fine pulls no punches, attacking the dodgy science and "neurosexism" of everyone from university professors to writers of popular self-help books with a zeal that recalls Bad Science author Ben Goldacre. Lashings of wit ensure that the book is eminently readable, despite the complex subject matter, and Fine's passion is both obvious and infectious: 'No, really, no need to thank me. I do this for fun,' she assures the reader at one point. As a result, this important book is as enjoyable as it is timely and interesting."

"In her book the psychologist Cordelia Fine takes apart with gusto the pseudo-scientific gender theories ... her book presents detailed alternative and much more satisfying models that explain gender differences. ... Cordelia Fine's book written entertainingly, confirms the insight that the brain is an immensely flexible and social organ. To look at it in isolation through a scanner can only give an incomplete and one-sided image of its true potential." [Unofficial translation.]

"Luminary psychologist Cordelia Fine calls attention to the role that 'neurononsense' plays in masking (unscientific) tautologies ... Each chapter unravels as beguilingly as a detective novel while Fine expertly probes deeper into studies on amniotic testosterone, child development and 'the foetal fork', uncovering a crescendo of cliffhangers on her way into the dark heart of the gender issue. It is literally a psychological thriller."

"Fine's tone is witty but the citations are detailed and the bibliography is extensive. ... Our experience of the malleability of the young is also that we have seen how quickly they can move to fight for their education and social justice. This book is an entertaining weapon in that fight and will make a nice 'thwok' sound bouncing off the heads of sexists."

"Whatever the supposedly 'typical' male or female behaviour, there seems no shortage of writers to tell us it is evidence of fundamental differences between men and women hard-wired into our brains. In this incisive, accessible and often laugh-out-loud witty book, Cordelia Fine shows these arguments for what they are: not biological truths, but modern versions of the tired old sexist ideas about a woman's proper place."

"This is a book with such a large scope that it's near-impossible to overestimate its importance. Much like The Spirit Level did for socio-economics, this book ropes together decades' worth of studies on gender differences and casts a cool, calm eye (and an arched brow) over them all. ... This book will cast a light on gender assumptions you didn't know you had, and it-s hilarious ... Dr Fine is a brilliant tour guide - making light, fun and engaging work of the research. By debunking the rubbish, this book opens up possibilities for a (slightly) clearer vision of the future. Not to be missed."

"[T]his book is a revelation. ... not only incredibly thought-provoking, but also thoroughly enjoyable. Fine has a clear and amusing style that enables her to explain how seriously complicated the brain is without boring the reader"

"Through developmental psychology, neuroscience and social psychology Cordelia Fine smashes some of the most ingrained sexual myths with humour and honesty. Delusions of gender is a well researched, interesting book sure to resonate with many." 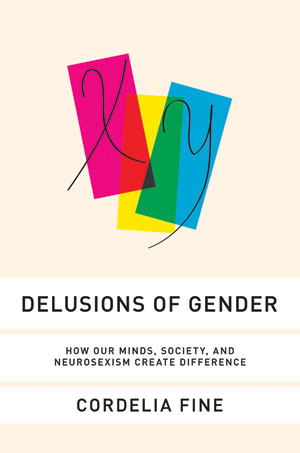 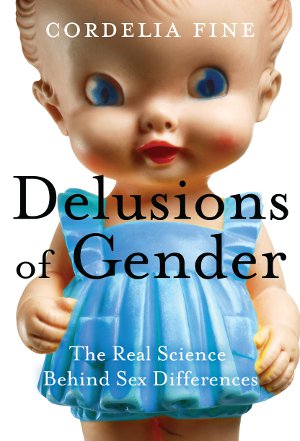 a mind of its own